This 6×10 popcorn stand design comes from the short lived Lunch-Craft Incorporated of Wichita, Kansas.  The only record of Lunch Craft names O.G. Griffin as the sole officer on record. Since so much of this binder’s contents are Valentine, everything about this, from the photo studio used to make the prints, to the style of rendering, to the “design by Gilbert” are identical to the Valentine Industries promo material of the same era, I don’t know if Lunch Craft was a sub-line of Valentine, or a short lived reorganization, or even a short lived competitor.  I’m leaning more towards a c.1945-1946 reorganization, as Valentine was coming out of the war and starting up production again.  Hayes Mfg., who had built Valentine Diners, went out of business in 1942, Valentine Industries only lasted 1945-1947, closing when H&H parts, who built the diners for Valentine, switched to building aircraft components. Valentine Mfg., the best known in the chronology of Valentine Diners, opened in 1947. For me, this period of change seems the most likely for a previously unknown name to pop up, then disappear, with novel products, possibly without actually building any of them.  I’d also wager that the Gilbert in “design by Gilbert” refers not to a person, but to Gilbert Street, where Hayes (and by extension Valentine) was based in the late 1930s-early 1940s. 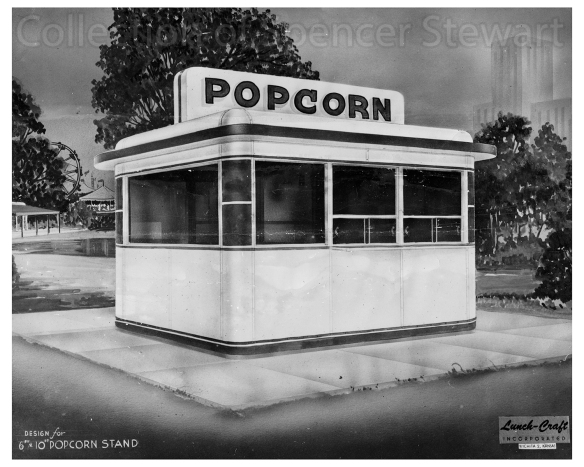