The former State Diner of Baltimore, a c.1934 Silk City, was briefly revealed during demolition on April 3-4, 2019. A trolley conversion was originally at this site, opening in the early 1940s, replaced withe this used Silk City around 1952. The diner had originally been installed in Laurel, Maryland, where it also replaced a trolley conversion, and was replaced with a Comac that is now known as the Tastee Diner. In the mid 1980s, during a larger trend of diner remodeling, the State Diner was bricked over, though the interior remained largely in-tact until its closure. Since then, it’s operated as a Barbecue restaurant and a used car dealer, losing its interior at some point in the intervening years. A big thanks to TJ McLaughlin for the tip about the diner being exposed yesterday, and to Michael G. Stewart for driving up to get the photos just before what was left was knocked down, and  The State Diner was located at 2801 Wilkens Ave, Baltimore, MD.

1930s photo of the State Diner at its original location on Rt. 1, Laurel, Maryland, present site of the Tastee Diner. Thanks to Richard Friend for sending me this photo, which was originally published in Alan Virta’s book, “Prince George’s County: A Pictorial History”. The monitor roof was obscured with signage at the Laurel site.

The State Diner, photographed in 1981 for a Henry Scarupa penned article on Maryland Diners which appeared in the Baltimore Sun.  The diner is definitely showing its age, with panted signs replacing the neon, faded paint and dented stainless.  At some point after the move, an effort was made to modernize the look of the diner somewhat: canted stainless trim has been added at the eaves and the original windows have been replaced with fixed glass.

Some time in the 1980s, with the then 50 year old secondhand diner showing its age, it was further remodeled, with a shake shingle mansard roof and brick cladding completely obscuring the diner.  The windows were again modified, altering them to double their original width. A liquor store addition was added to the left side and the door on the right side of the diner was deleted.  From the outside, you would never know this building was once a factory built diner.

However, the original interior with its monel vent hood, barrel roof, original menu boards and tilework remaining largely intact. At the time of its closure, the State diner had arguably the best preserved early Silk City interior. 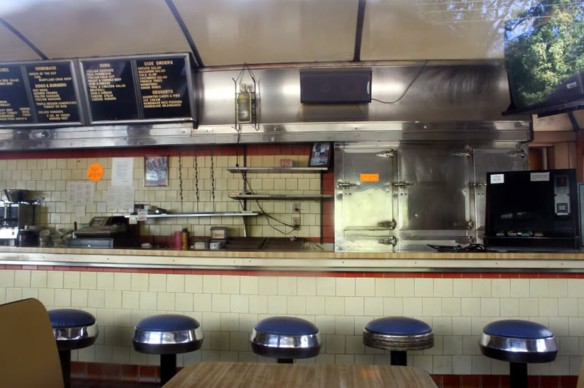 Demolition started in early April, 2019, revealing what was left of the diner’s gutted shell and faded sign painted on the kitchen addition. 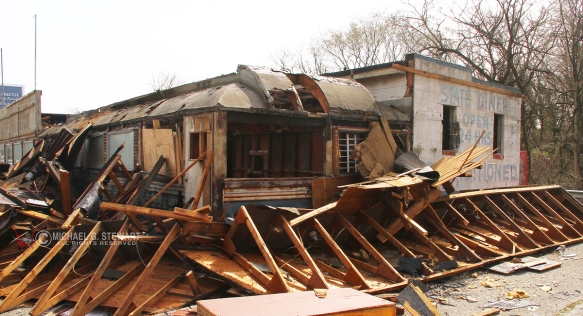