That the Valentine sales portfolio included Kullman advertising makes some sense- In the 1930s, Kullman did good business building “castle turret” dinettes and other small diners, which would have been in at least some degree of competition with Valentine’s earlier iterations of Ablah and Hayes. I haven’t been able to put a firm date on the Valentine sales portfolio because so little is dated and it has at least a decade’s worth of material in it, spanning several companies, but the newest in there is late 1940s at the oldest, which would put this Kullman at roughly 10 years old. With the huge changes taking place in east coast diner design in that postwar period, this model would be hopelessly outdated by that point, and maybe that’s part of why it’s in Griffin’s portfolio. “Now why would you want this giant, expensive, old fashioned kind of place when you could have a brand new, modern, efficient Valentine diner on reasonable terms?”

This last batch of photos was really badly water damaged, stored in early plastic sheet protectors for the past almost 70 years, which trapped water inside, shrunk up, molded and stuck to the image, pulling off chunks from the surface of the picture.  I’ve been able to clean up a lot of it in post production, but with this kind of damage, there’s only so much you can do. 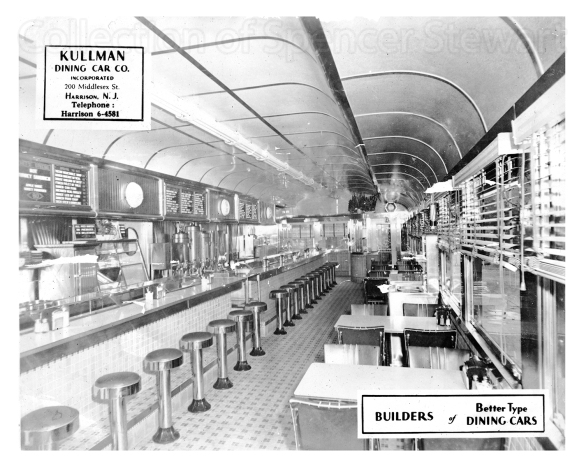